BECOME A PRESENT PARENT
You'll have a foundation to grow from to create balance in all of your relationships.

I Want To Support My Teen!CLICK HERE... You Can Be An Amazing Support For Your Child!
YOUR TEEN NEEDS YOUR SUPPORT!
The teen mental and emotional health epidemic has grown dramatically over the last decade and many parents are grasping for hope as they watch their young ones slip away.
In fact, the CDC reports that more teenagers and young adults die from SUICIDE than from cancer, heart disease, AIDS, birth defects, stroke, pneumonia, influenza and chronic lung disease, COMBINED!
When I first learned this I literally dropped to the floor, but the study continued... Every single day in our nation, there are an average of over 3,041 suicide attempts by young people grades 9-12. That's over 1 Million Kids Every Single Year!
Ready for the real kicker?
FOUR OUT OF FIVE TEENS WHO ATTEMPT SUICIDE HAVE GIVEN CLEAR WARNING SIGNS
THIS MEANS WE CAN STILL DO SOMETHING BEFORE IT'S TOO LATE!
One of the biggest problems I saw in my years on the front lines as a social worker and mental health practitioner was the extreme focus on disease, weakness and diagnosis. There was so much time and energy going into what was wrong with someone, that the person was pushed to the wayside and treated as nothing more than a number with a problem.
I've watched countless families drain their retirement accounts seeking treatment and answers for what could have been addressed years in advance. I've seen people spend years in appointments, programs and with specialists all to get nowhere and in some cases... worse.
In fact, it got all the way worse. In March of 2013, one of the young women in my care lost her life from a fatal prescribed drug interaction. For weeks leading up to this, I pleaded with her doctors not to force her treatment plan. They didn't listen and required her to commit to a lifestyle change she was not ready for.
I COULDN'T JUST SIT BY AND WATCH THIS HAPPEN
I KNEW THERE WAS A BETTER WAY!

HOW TO SUPPORT YOUR TEEN
THROUGH THE WAVES OF ADOLESCENCE
18 LESSON COURSE + SO MUCH MORE!!!
taught by Kirsten Cobabe, creator of the Raising Unicorns method. Kirsten has studied THE STRUGGLES OF YOUNG PEOPLE for decades. SHE is a fluent translator in the language TEENS have been speaking forever.
YES! I Want To Learn With Kirsten!!!CLICK HERE! Get Instant Access Today!
What Makes This So Different?
The Raising Unicorns method is revolutionary because it teaches you how to end the power struggle with your teen and instead, invite them INTO shared values and common ground.
Thousands of families have strengthened their connection using the Raising Unicorns method with Kirsten Cobabe. But seriously, how can you know what to do or if you are doing it right? The answer is to join our online workshop or hire one of our parenting coaches.

Kirsten Cobabe, MSW
I know it can feel impossible to get through to your teenager. I’ve helped hundreds of parents and people who work closely with children and teens. When you focus on presence and strengthening the relationship, your teen starts coming to you, your kids grow into balanced, healthy adults and your family forms a bond you can be proud of. 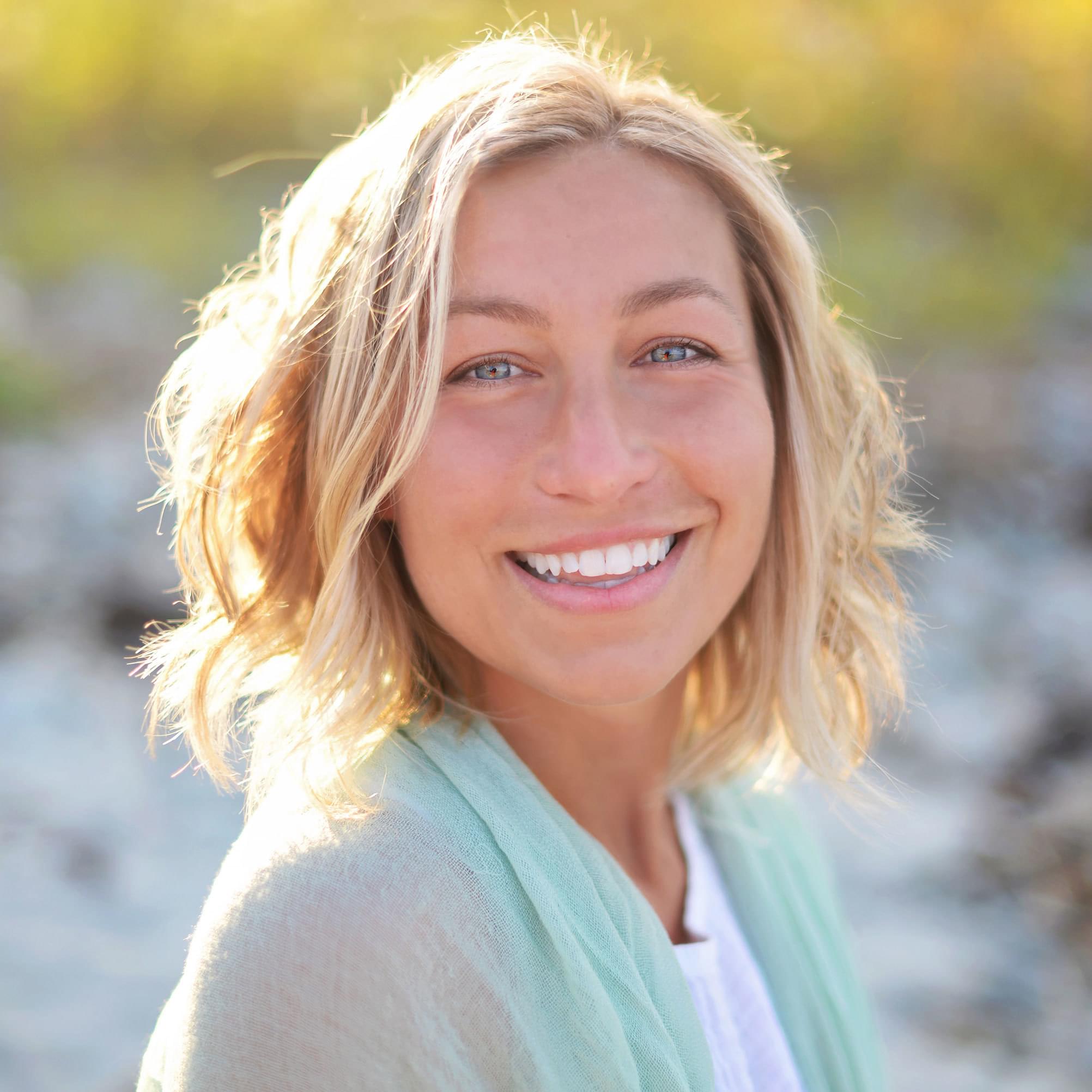 Kirsten has coached countless parents to help them strengthen their relationship with their teens.
Kirsten isn’t a professor in a lofty tower. Her approach emerged to help her create radically open connections with her own clients as a social worker and with the young people in her care.
Since then, she’s gone on to consult with innumerable struggling families and dozens of counselors and schools.
Kirsten’s clients have dramatically transformed their family connections after learning this Present Parenting approach.
I Want To Support My Teen!CLICK HERE... You Can Be An Amazing Support For Your Child!
IN THIS 18 LESSON COURSE YOU WILL...
1. Learn a proven communication formula that has been used almost since the beginning of time. SO THAT YOU CAN completely understand how relationship and connection work and why they’re the most powerful tools on the earth for supporting each other.
2. See how this formula has been used by the world’s happiest families in times of conflict, stress and struggle. so that you can grow closer even when things are difficult.
3. Apply this framework to your parenting approach. so that you can openly talk about: emotions, social media, friends, school, difficulty, curfew, money, sex, parties, and drugs.
Raising Unicorns will help you create a deep connection that gets stronger through the ups and downs life brings.
GET INSTANT ACCESS!
LEARN HOW TO SUPPORT YOUR TEEN THROUGH IT ALL TODAY! 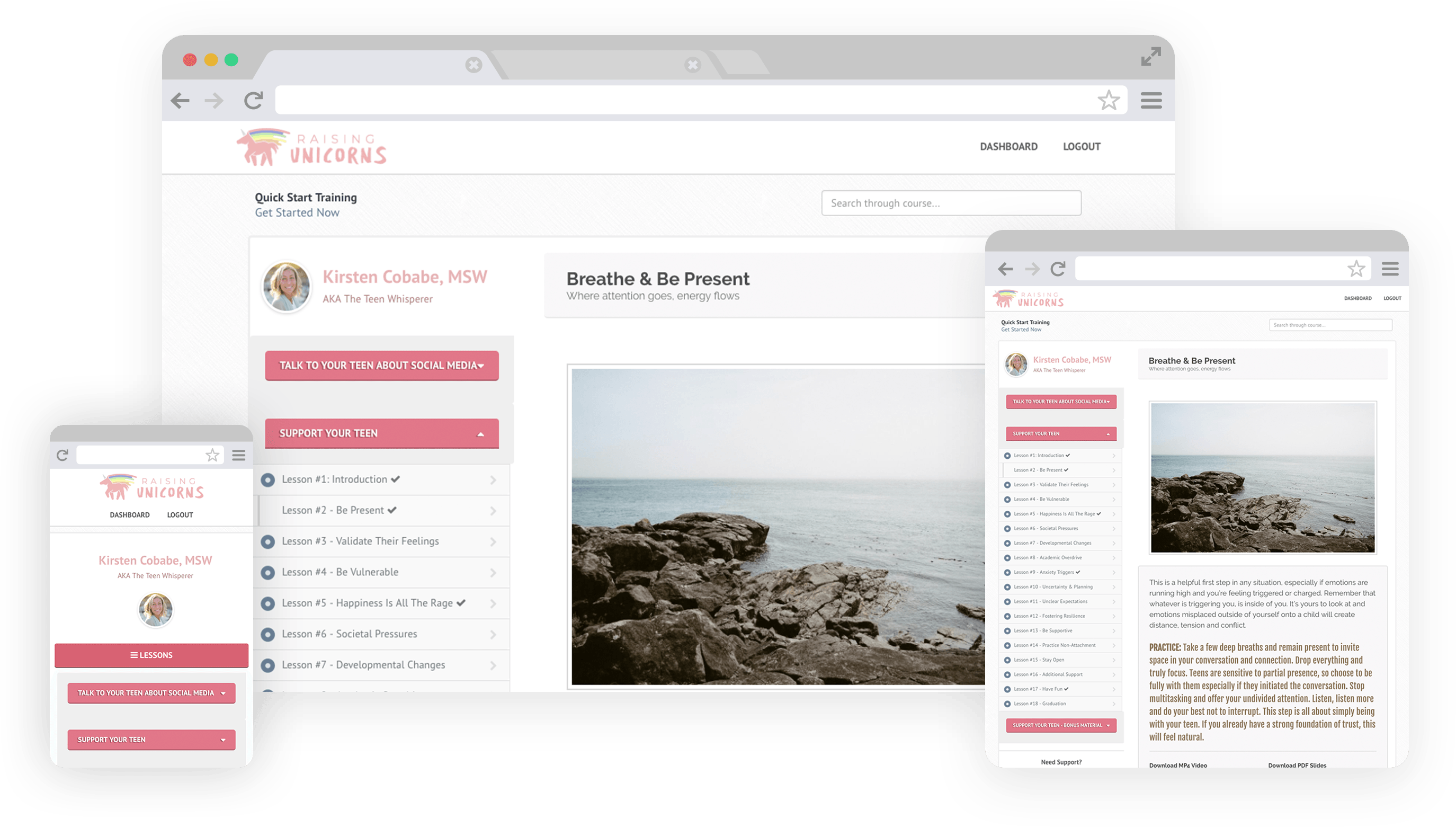 18 Practical Lessons On Supporting Your Teen
$997 VALUE
Each lesson is broken down into easy to digest, bite sized pieces with an actionable practice you can use to instantly put the concept to work.
Enjoy lifetime, access from your computer, laptop, tablet or mobile device so you can learn at home and on the go! 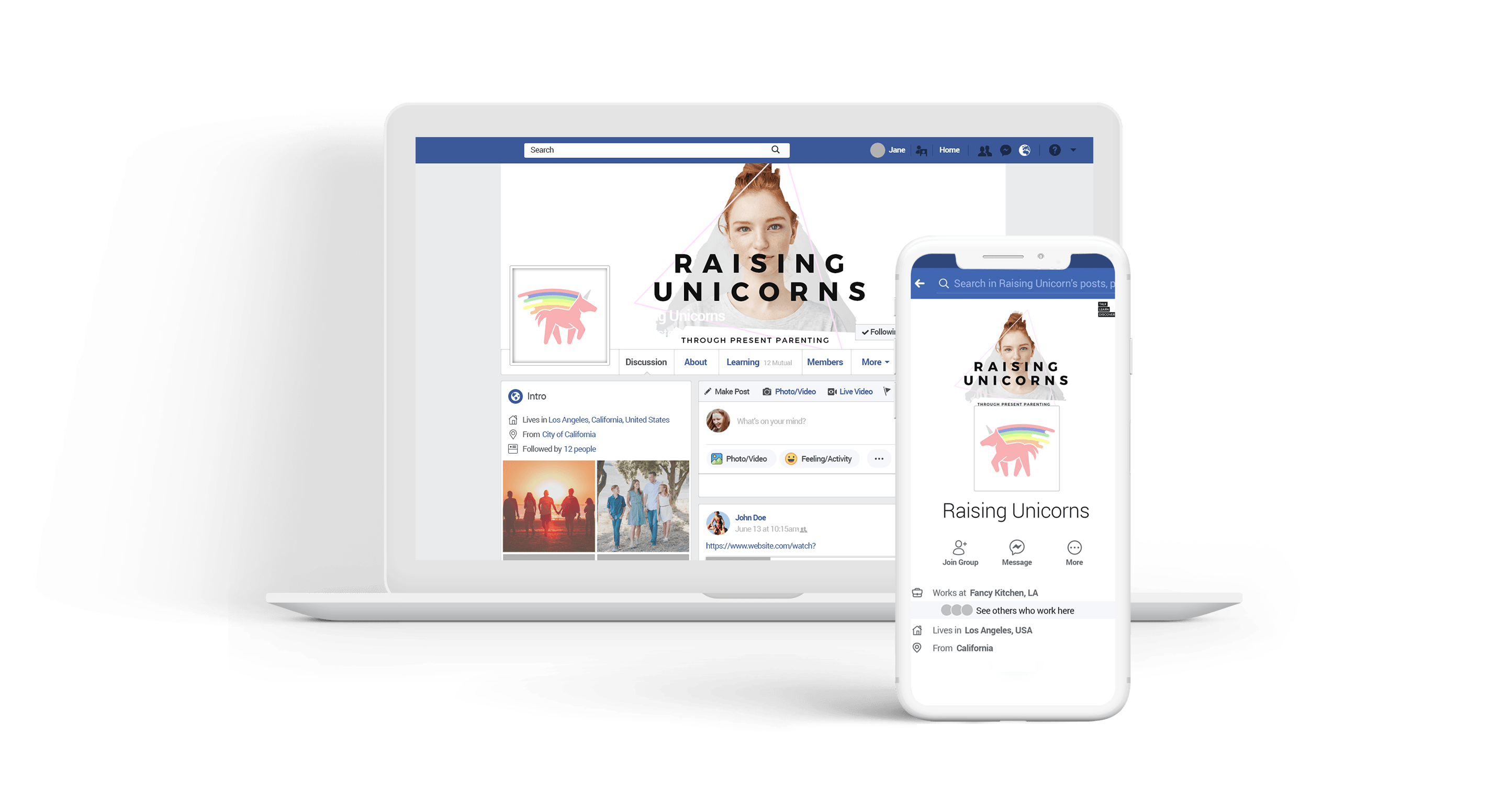 Access to The Raising Unicorns VIP Group
$297 VALUE
You don't have to do this alone! Get support, share stories and learn from those who are with you in the trenches in our private Facebook group. 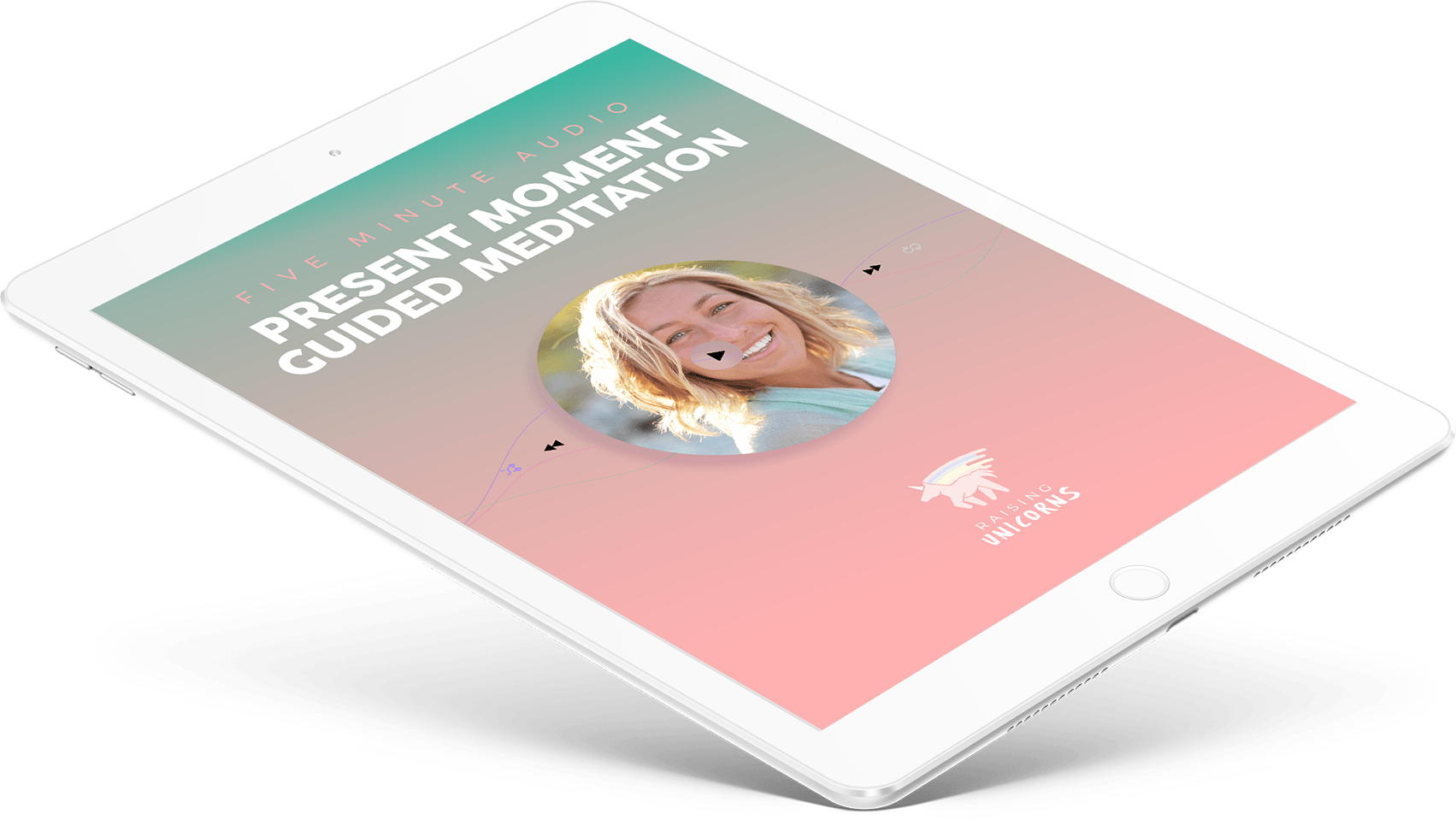 Guided Audio Meditation
$97 VALUE
Find peace in the present moment. This five minute guided audio meditation is designed to bring you back to your center amidst a busy day of parental duties. Take five for yourself and tune into what's already right here ready for you. 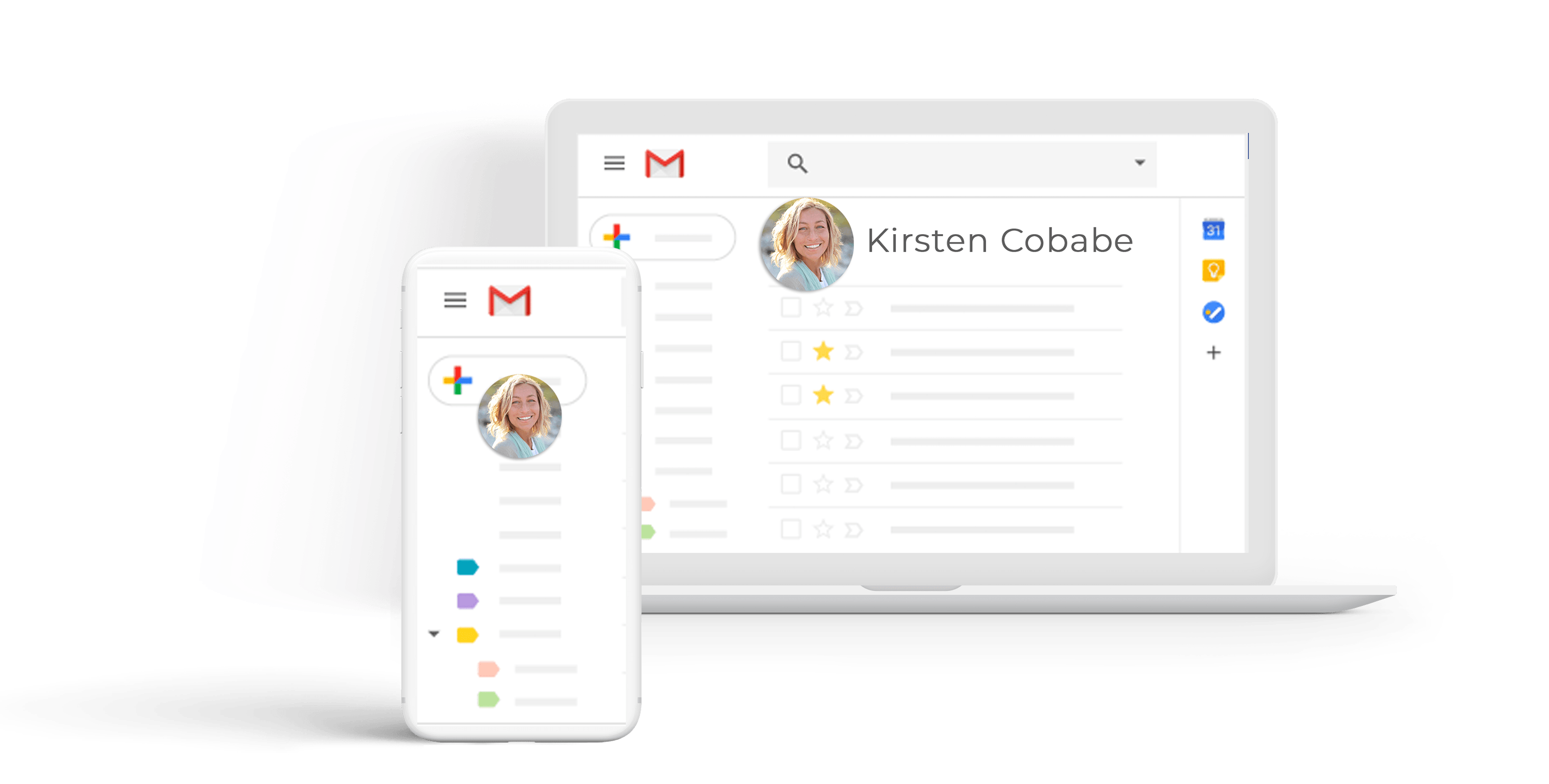 Access To My Personal Email Address
∞ VALUE
I know you are going to be inspired and challenged by this course and I want to be the first to hear about it. I'll share my personal email address with you so that we can correspond when a puzzling moment arises.
YES! Get It All For Just $97!CLICK HERE... Get Instant Access Today
WHEN YOU REGISTER TODAY
YOU'LL GET ALL OF THESE BONUSES - AVAILABLE ONLY THROUGH THIS OFFER!
Bonus #1 - Communication Cheat Sheet ($97 VALUE)
Communication Quick Reference
Five conversational topics explained so that you can keep the communication flowing with your child or teen. Learn the secrets of open connections so that your teen can learn to connect in healthy ways with you and others. 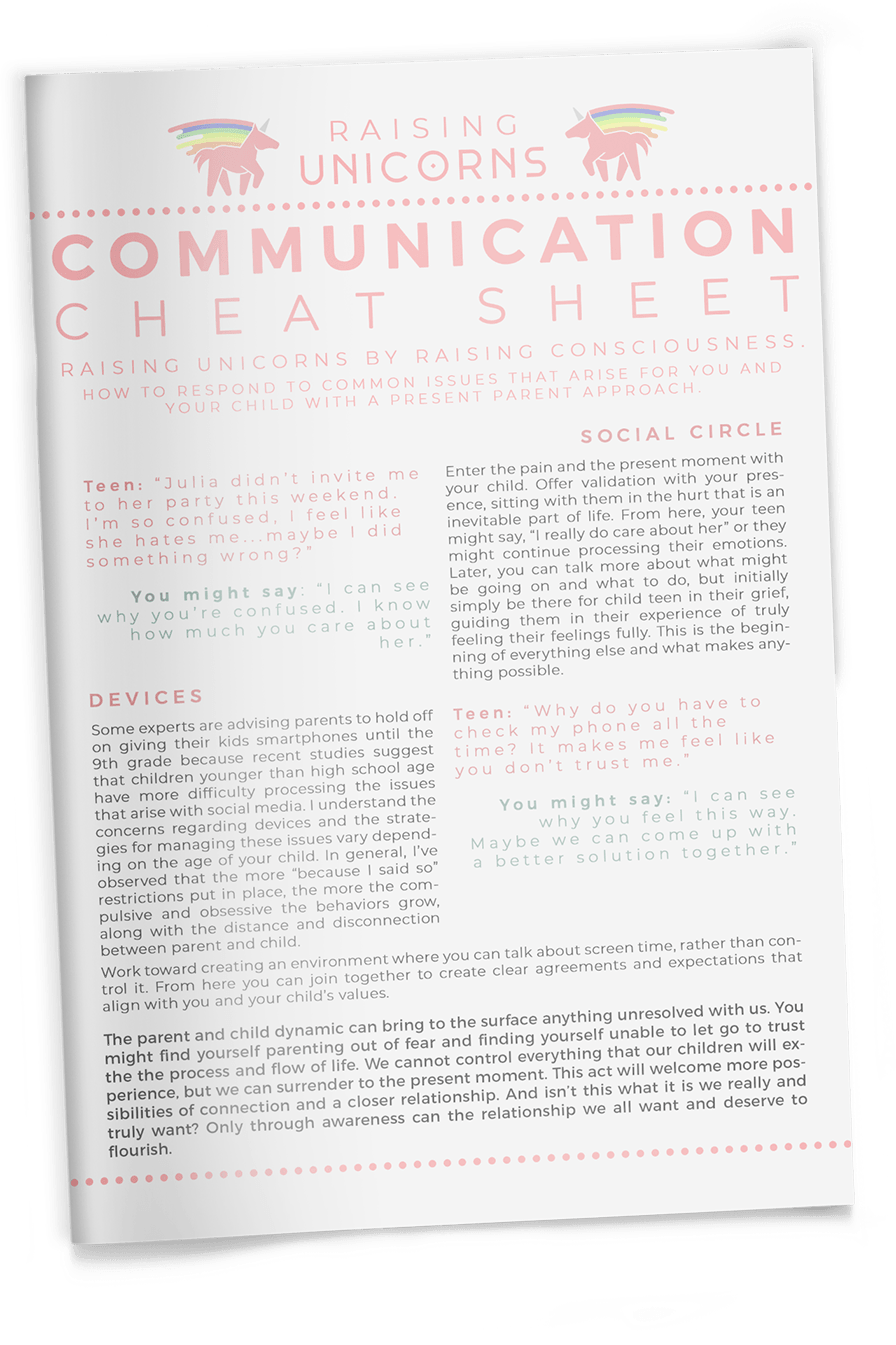 Bonus #2 - Waldorf Founder Book
($37 VALUE)
Waldorf Education System Founder
The wisdom of Rudolf Steiner echoes across the ages in this magnificent book authored over 100 years ago. His timeless wisdom outlines an approach to teaching children through inspiring their discovery, individuality and creativity. Rudolf teaches us to align with the creative nature of life so that we may create safe spaces of discovery for our children to learn, explore and be. 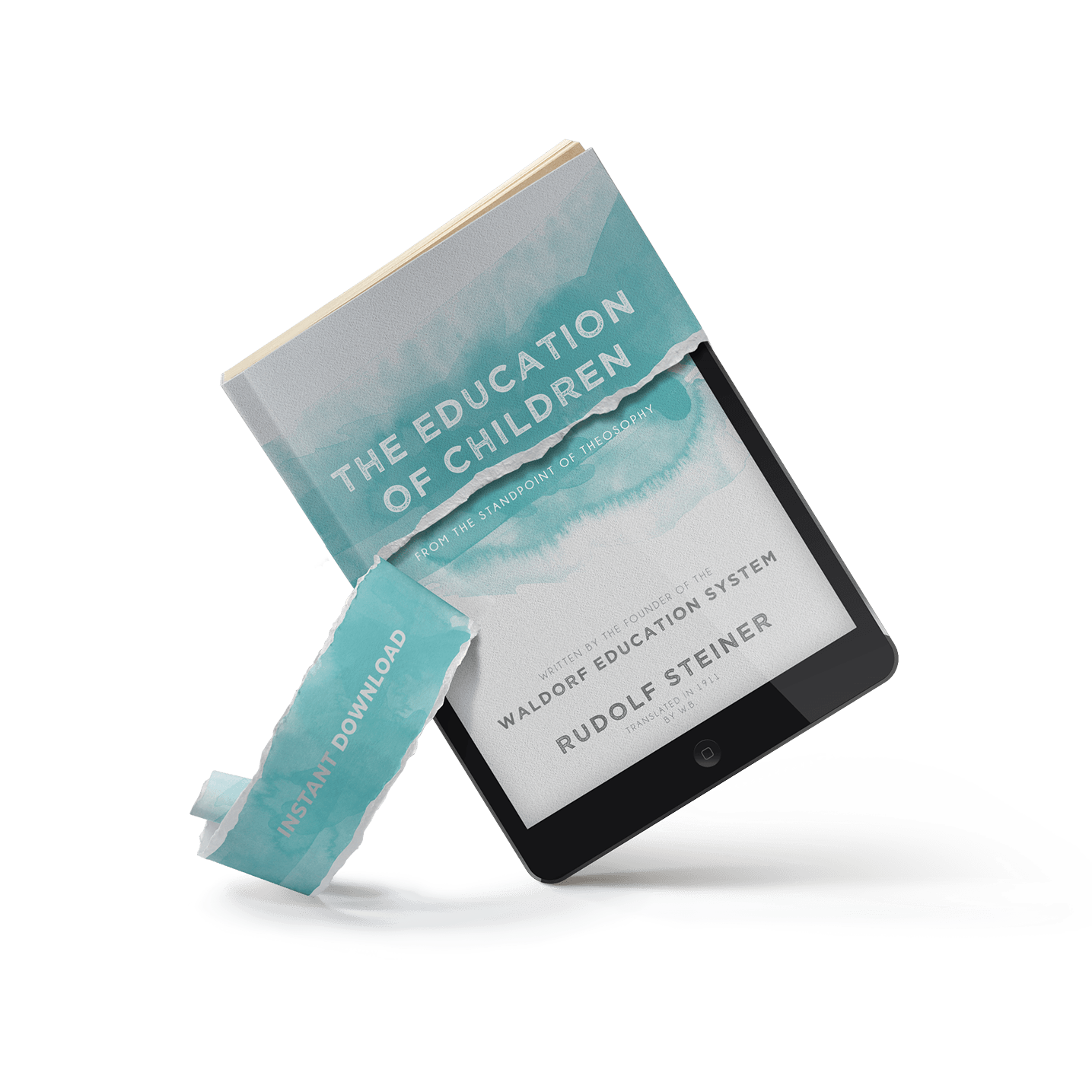 Bonus #3 - The Science Of Breath
($37 VALUE)
Learn The Power Of Breath
The best parents are masters of presence. Those who have mastered presence know that the breath is arguably our most powerful tool. In this book you'll learn the secrets of using the breath so that you can stay cool and collected in the most challenging of parenting situations. 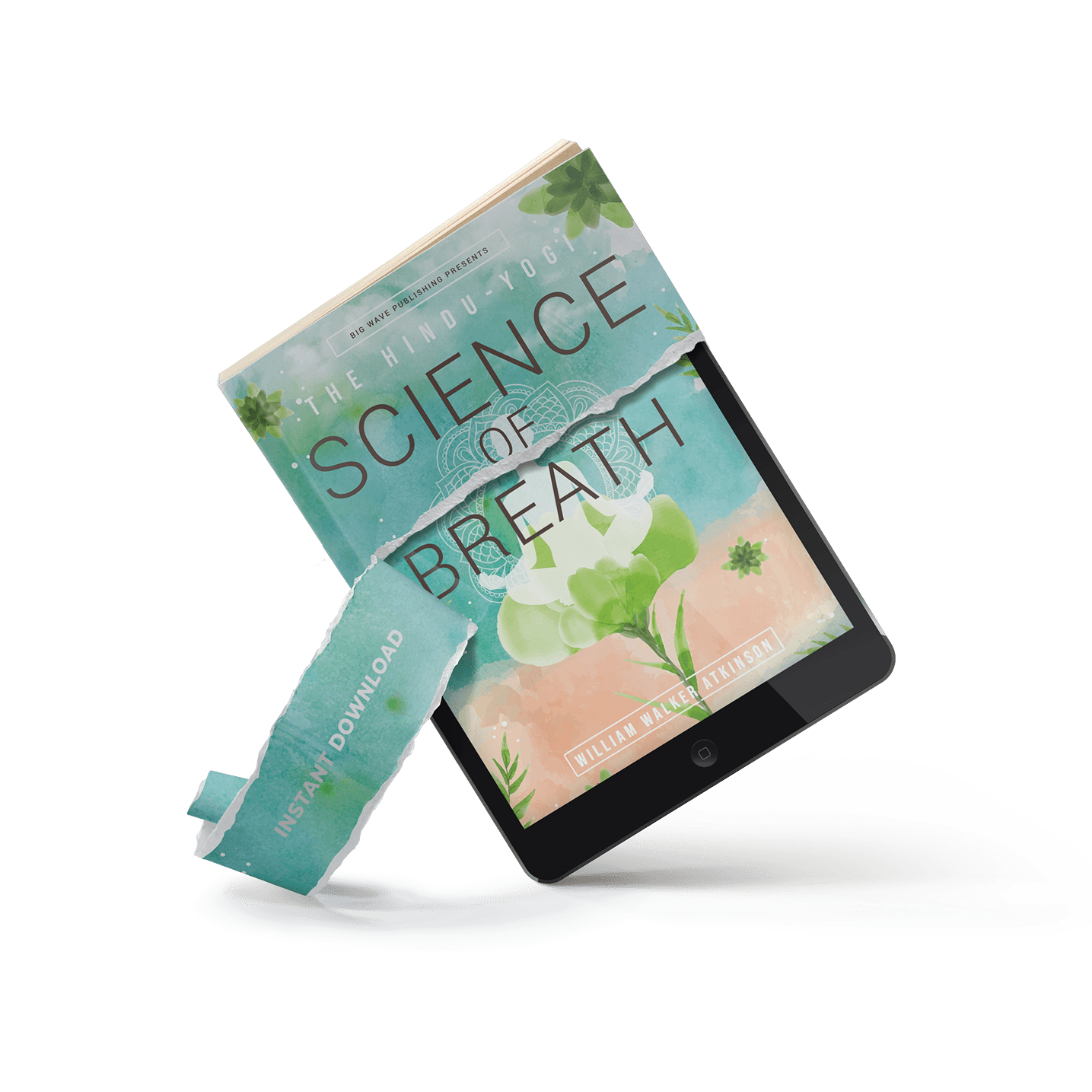 Total Value: Over $1,562
But today, you're getting all of this...
For Only $97
I'm Ready To Support My Teen!CLICK HERE... Get Instant Access When You Get Started Today
HURRY! This $97 offer will NOT be available forever.
CREATE A CONSCIOUS CONNECTION
Create an engaging and open connection with your child that fosters trust.
LEARN A LANGUAGE THAT GETS THROUGH
You don't have to come off as the 'cool' parent to be heard and respected.

BECOME A PRESENT PARENT
You'll have a foundation to grow from to create balance in all of your relationships.
TAKE ADVANTAGE OF MY LIMITED TIME INTRODUCTORY OFFER!
I wanted to see what would happen...

I want to help as many families as possible this year and so I am running a bit of an experiment. I am offering this $997 course + sooo many extras for the absurdly low price of $97. People keep telling me there is way too much value here to be giving it away, so I don't know how long I'll get away with it.
But as long as the button below still says $97 you are eligible to take advantage of this special preliminary pricing... Get it before my team makes me take this down forever!
YES! Get It All For Just $97!CLICK HERE... This Introductory Offer Won't Last Long

OF COURSE THERE'S A 30 DAY
MONEY BACK GUARANTEE
WHICH MAKES IT ABSOLUTELY RISK FREE,
SO YOU'VE GOT NOTHING TO LOSE.
WHAT'S YOUR RELATIONSHIP WORTH?
How much is A strained CONNECTION with your teen costing YOUR RELATIONSHIP?
How many times have you tried to connect with your child but they can’t hear you in the sea of noise? How many of your conversations are one-sided because your teen doesn’t seem to care? How many times will your kids pass up your guidance? Can your teens understand why they need your care and support? A lack of connection may already be affecting your family.
GET STARTED TODAY JUST $97!
YES! Get It All For Just $97!Go On... You KNOW You Deserve It!
WHEN YOU EVOLVE YOUR RELATIONSHIP
YOU WIN THE PARENTING GAME!
The human brain is drawn to HARMONY and away from STRAIN. If teenagers are offended or shut down, they’ll look past you for somebody who can connect with them. Once you strengthen the core of the relationship, your influence will begin to grow.
Register for the 'Support Your Teen Online Workshop' today and enjoy 18 GUIDED lessons AND SO MUCH MORE.
Why? Because your children will never know how amazing they are until you show them, in the right way.
-KIRSTEN COBABE

Join Me Today For Just $97!CLICK HERE... You And Your Teen Deserve The Best Connection!
Here's A Recap Of
EVERYTHING YOU'LL GET
when you register today!

One Time Offer - Only $79: Limited offer just for participants of the course... ONE HOUR PRIVATE COACHING SESSION with Kirsten. Dive into your unique situation and get real-time, actionable guidance. ($180 VALUE!)

Item
Price
$97
$79
Complete Registration Now! >>
Your order has been declined. Please double check your Payment Details or contact support for information.
Apple or Android Pay will Display here when available.

If you implement EVERYTHING I show you, and don't see a change in your relationship, I'll not only refund you - but even give you $100 for wasting your time. That's how confident I am!

Each order is processed through a secure, 256-bit encrypted payment processing gateway to ensure your privacy.

"Your warmth, compassion and approach are unmatched. You have changed our lives forever and we are incredibly grateful to know you. You brought so much peace into our world; this is a gift that will never be forgotten."
- P. K. New Hampshire
"You were the perfect guide who appeared at the exact time in my life when I needed you. You gently communicated in a way to which I could feel on a deep level. Thank you so much for your guidance!! It truly changed my world."
- M. L. California
Kirsten Cobabe, MSW & Raising Unicorns does not dispense medical advice or prescribe the use of any technique as a replacement form of treatment for physical, mental or medical problems by your doctor either directly or indirectly. Kirsten Cobabe, MSW & Raising Unicorn’s intention is to offer a variety of information and tools to help the reader in their quest for present parenting, emotional and physical well-being.
Terms & Conditions  |  Privacy Policy  |  Disclaimer
Copyright 2019 - Raising Unicorns with Kirsten Cobabe - All Rights Reserved
RU - 9